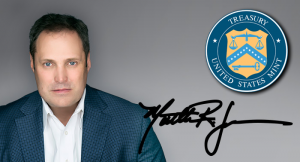 Rhett Jeppson served as Principal Deputy Director of the United States Mint from January of 2015 to January of 2017. His title was “Principal” Deputy Director, because since 2011 the Mint did not have a Director nominated by the President and then confirmed by the Senate, leaving a leadership void that needed to be filled due to unique challenges the Mint was encountering. The Treasury Department created a temporary “Principal,” a position and title designed to impart the full authority of the directorship, when no one held the position. Jeppson embraced the challenges wholeheartedly and embarked on an increased period of bold and fearless collector engagement. If anyone was expecting a stopgap substitute, that memo didn’t reach the desk of Rhett Jepson.

Rhett Jeppson served our country for twenty-eight years, as a United States Marine. For a period of that time, from 2009 to 2010, Rhett served as Deputy Director of Operations for U.S. Forces in Afghanistan. When concluding his military career, he joined the Small Business Administration and rose to acting chief operating officer in 2014. When he assumed the position at the Mint, he hit the ground running and never looked back. During the two years prior to his tenure, the Mint contributed a profit of less than $350 million to the Treasury General Fund. During his time at the helm, the General Fund saw profitable returns in excess of $550 million annually. In spite of metal supply issues and increased demand, the Mint’s ability to cut costs and maintain a perfect delivery record, while shipping 16 billion circulating coins was a masterful accomplishment by Rhett Jeppson.

Rhett Jeppson provided the Mint with a stellar list of accomplishments. Just as an example, in 2016, the Mint celebrated the 30th anniversary of the Silver Eagle. It literally took an Act of Congress, but Jeppson arranged for the first ever meaningful design change in the series and a technically complex one at that. All numismatic/non-bullion versions of the coin for 2016 were edge-lettered. Additionally, he returned the highly coveted bullion Platinum Eagle to production, by overcoming long lingering problems securing blanks. Before leaving, Jeppson laid the groundwork for production and release of a high relief $100 one-ounce gold coin celebrating the Mint’s 225th anniversary. The coin’s groundbreaking design is coupled with the most technically difficult coin the Mint has ever produced, another first for the Mint, compliments of Rhett Jeppson.

Rhett Jeppson was honored during his first year at the Mint, with a Presidential nomination to become the next Director. He received Senate Banking Committee’s approval as well, but as anticipated, a vote on the Senate floor never occurred. While the nomination formalized his directorship authority, according to custom it also meant that his term would end in January of 2017, when a new President took office. His two years of service reenergized the Mint and put it in a far better position to move into the future. Our country owes tremendous gratitude to the lifelong service provided by Rhett Jeppson.

American gold and gold coins have been a passion for Rhett ever since he directed the U.S. Mint. “There are no gimmicks at the U.S. Mint” he said, when asked for a comparison with the products of other Mints.

The American Bullion Gold Guide is Rhett’s recommended choice for those interested in learning all about precious metals investing. Get your copy today!

contact us
get Rhett's choice of FREE gold guides here!

Question 1:
An interesting explanation of how proof coins are struck and what makes them so special

Question 2:
Describe in detail the superiority of US minted coins compared to any others

Question 3:
Why I joined forces with American Bullion and why it’s important to diversify IRA’s

Question 4:
Why Rhett Jeppson signed coins sets are a great addition for old or new collectors?

Question 5:
Who you are, your qualifications, and your history, which allows you to speak to these topics?

Get Your FREE Gold Guide!