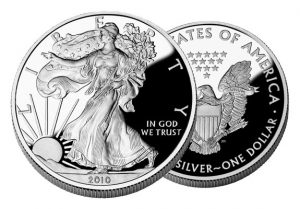 Silver Eagle refers to the American Silver Eagle Coin first released by the United States Mint on November 24, 1986. The One Dollar face value coin is struck in the one troy ounce size and contains 99.9% pure silver. At varying times and in varying production amounts, the United States Mints in Philadelphia, San Francisco, and at West Point, produced proof versions of the coins, as well as uncirculated versions for collectors. The obverse (front) of the coin features Adolph Weinman’s “Walking Liberty” design originally created for Walking Liberty Half Dollars produced and released from 1916 to 1947. A John Mercanti design portraying a heraldic eagle behind a shield graces the reverse (back) side of the American Silver Eagle.

Silver Eagle Coins were ultimately the result of a great deal of consternation on the part of several presidential administrations, who felt that domestic silver production was operating at a far greater level than any possible strategic need.  Throughout the Seventies and early Eighties, efforts to liquidate any of the U.S. silver stockpile was regularly met with fierce opposition. But financial pressures of the Cold War and a growing national debt managed to keep it on the minds of succeeding administrations. One of the greatest lobbying heavyweights on the opposition side were mining states fearing that any type of government selloff would flood the market, increasing supply in the face of limited demand and thereby decreasing silver’s value. This provided more than a small hurdle for creation of the Silver Eagle.

Silver Eagle Coins were not a hot commodity in the minds of investors either, because most investors were also involved in the commodities market, so they too saw any type of silver release by the government as a reason for futures contract holders to unload contracts in advance of any such governmental sale action which would be sure to depress silver prices. Despite opposition, the House Armed Services Committee decided to approve the Reagan Administration’s request to sell federal silver, beginning in 1982.  A month after the Committee’s approval, Congress agreed to allow three-quarters of the stockpile to be sold over three years. News of the sale caused silver prices to drop by eleven percent. Mining-state politicians successfully proposed an amendment to end the federal sale of silver “until the President, not later than July 1, 1982, re-determines that the silver authorized for disposal is excess to the requirements of the stockpile.” The amendment’s success put another wrinkle in the flight of the Silver Eagle.

how can we help you?

Contact American Bullion with any questions about your Gold IRA and investment strategies. Our agents are ready to help get your started!

Get Your FREE Gold Guide!